A HUM ABOUT MINE EARS

The Tempest is set in new surroundings in this performance of vocalist and composer Clara Sanabras’s album A Hum About Mine Ears.

More than a simple soundtrack to the play, A Hum About Mine Ears takes some of The Tempest’s ideas and themes – loss and retrieval, exile and reunion – and relates them to Sanabras’s own experiences as a modern woman and an emigrant.

While some songs lift direct passages from the play, others place the characters in more modern settings – Sanabras’s powerful delivery casting Ariel as a festival-crazed, free-loving spirit, or Miranda as an independent woman, emancipated from Prospero.

Drawing on elements from blues and jazz to European folk, this is one of Shakespeare’s most famous works unravelled in a performance as deep, mysterious and expansive as The Tempest itself. 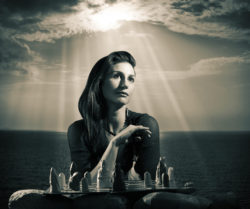