Clara Sanabras will launch of new album, ‘Fugue To The Floating World” on May 2nd at London’s famed Wilton Music Hall.

A stunningly diverse collection of songs, it was written as a meditation on the transient world of love and magic.

‘Fugue to the Floating World’ has a lush and unique cinematic folk sound, an otherworldly quality that pushes the boundaries of folk music allowing for a colourful and vibrant, yet never obtuse sonic exploration, taking in elements of Jungian psychology, archetypal mythology, and ancient teachings.

Featuring Irish guitarist Jimmy Smyth, the album is a collection of confessional love songs, its title derived from several meanings – the concept of a fugue as both a musical form, and the mental state of a ‘fugitive mind’; as well as descriptions throughout several cultures of ‘the floating world’ drawn from eastern literature through to Lewis Carroll’s Wonderland.

Clara describes the album’s core theme as being a discussion on escapism: ‘… the unconscious, pitting the urge to ?y free against the need for solid ground beneath our feet.’

Written whilst also collaborating with legendary The Kinks songwriter Sir Ray Davies on a 50th anniversary reimagining of The Village Green Preservation Society, ‘Fugue To The Floating World’ the latest in a formidable and diverse repertoire that demonstrates a uniquely versatile artist. 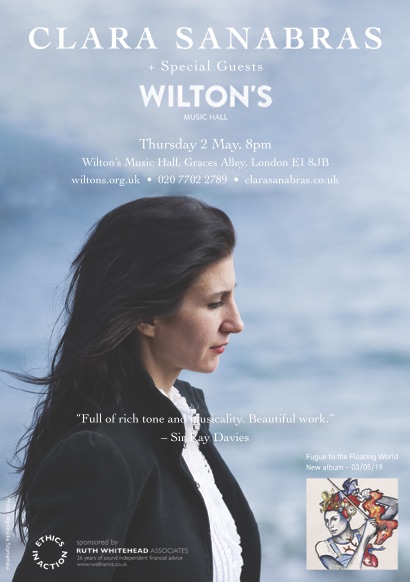